How idolatry creeped into the Catholic Church; the origin of Mary’s idol 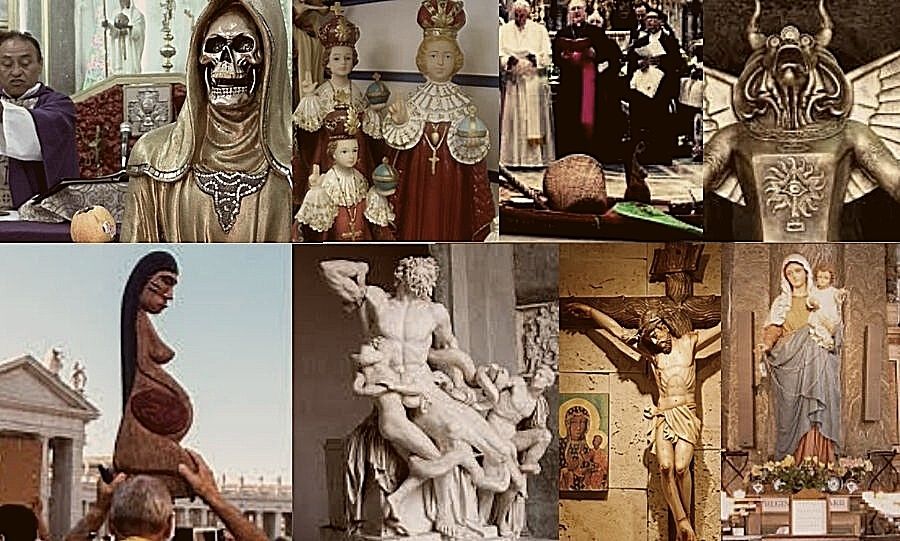 Topic: How idolatry creeped into the Catholic Church; the origin of Mary’s idol

I ask and have always asked, this system of worship of the Roman Catholic Church, all the idolatry, all the sacraments, the idols, the crucifix, the Mary reverence or asking it to pray, where is it in the entire Bible? No where!

But surely it appeared not from the moon, but rather came from either man or the earthly gods; for we know that the God of the bible has not given it unto us.

Brethren, we know that the foundation of God stands sure- 2 Timothy 2:19; and this foundation is in Jesus Christ and His teachings. And any other doctrine not founded on His teaching which is in the bible is corruption.

One of the arguments Catholics would make when you tell them about the need to go back to the foundation of biblical Christianity is that Apostle Paul and Apostle Peter worked in Rome.

And we say; Yes! Paul worked in Rome, and Peter also worked in Rome. Whereby Peter is to them the first Pope; his epistles and Paul’s epistles are in written the Bible. The teachings of the Jesus Christ and His Apostles are also written in the New Testament, but, there is no trace of the modalities of Catholic worship therein.

When Emperor Constantine won his war, and became the undisputed Roman Emperor, he declared that Christianity was to become the official religion in Rome.

With that decree, pagans, idolaters, harlots and all people came into the Christian Church having no other option. Before this time, Peter and Paul, centuries ago were already dead and long gone. Both Peter and Paul who once at a time were ministers in Rome, are believed to have died 64 AD or at most 70 AD.

Emperor Constantine the Roman Emperor who made Christianity a global religion during His reign, reigned AD 306 to 337. So the declaration was done within his time of reign which is centuries apart from the days of Paul and Peter.

Now, there is a big difference between a converted sinner who has known that idolatry is a sin and one who enters the Church with an idol, plus having no conviction of sin. That is how Paganism and Idolatry entered the Church.

For we know that bad seeds corrupts good ones. Food prepared with rotten meat makes the meal smell foul. This is how it was, that as idolaters became Church people, they corrupted it. But thank God they could not corrupt the written word of God.

In those days the Church grew strong and became a huge part of the Rome State. And by the time Rome fell, the Church was already very strong.

In those days the Roman Church leaders became like the head and controlled Christianity from Rome. Even governments listened to them and whoever was the overall Church leader.

Then in a bid to accommodate the idolatrous worship of men who were never preached to, but came in with idols, even their descendants, they removed the second commandment of God.

ALSO READ  Pentecostal Christianity: the absolute will of God for all Christians

Do not doubt this Christian man, make your research. There is a Roman Catholic version of the 10 commandments they had gotten from the Jewish Torah.

For they had edited and removed the second commandment which says: You shall not make for yourself any idol.

And one would ask, why would anyone try to edit the basis of faith? The great Law of same God they claim to serve? Why was it the one concerning idolatry?

It is because the Holy Scripture condemned the ways of the Christianity of the Romans in those dark ages. There was need to adjust the command which says:

“You shall not make for yourself an image in the form of anything in heaven above or on the earth beneath or in the waters below. – Exodus 20:4

Whether it be of God, Jesus Christ, the dead, angels, Mary, or any form of graven image, “you shall not make any” says the Lord who will Judge men.

So if you wonder why the system of Roman Catholic is not in Peter’s or Paul’s epistles or the entire bible, it is because these men where already dead and buried centuries ago before the Church became corrupted amongst the Romans and Greeks who were known to be highly paganized with many idols.

The above is the true origin of Maria idol in the Catholic Church. Even prior to the days of Jesus was Isis and Horus idolized by the Egyptians, of which without a doubt could have reached any land.

Another proof that the Churches in those days imbibed the idolatry systems into the Church is the celebration of 25th December which was formerly a pagan day.

Although we may celebrate 25th December (Christmas), believing that Jesus is the true Lord of all days and that Satan has none, and also being sure that we celebrate Jesus Christ. We must totally reject idolatry and the making of idols of wood or clay because God has commanded against it. And also because the entire bible contains none of such formality in worshiping the true spirit God.

Heed to the wisdom of God dear Catholic Church and those who have idols. Your zeal for God is good, although it is a wrong foundation- the doctrine of men.

Now is the acceptable time, now is the day of salvation, these are the days of Revival.

The wish of the Spirit that owns the Christian Church; He who birth the Church in Pentecostal Revival according to Acts Chapter 2, is that, all men would come under His grace and leading as He will soon pour out fresh fire upon the souls of His worshippers.

For it is only those who are led by the Holy Spirit are the true sons and daughters of God. Romans 8:14

He who has ears to hear, let him listen and harken to the voice of the Spirit who leads the Revival of the Christian Church; Amen!

In the Christendom we hastily use the word “revival”; the word “evangelistic mission” is preferable. Why? Because true revival is a sovereign work...
Read more
America

They call it the gospel of love, I call it gospel of hate. They say it is from God, I say...
Read more
Pentecostal

‘The coming revival’ by Leonard Ravenhil

For the earth shall be filled with the knowledge of the glory of the Lord, as the waters cover the sea.Habakuk 2:14
Read more