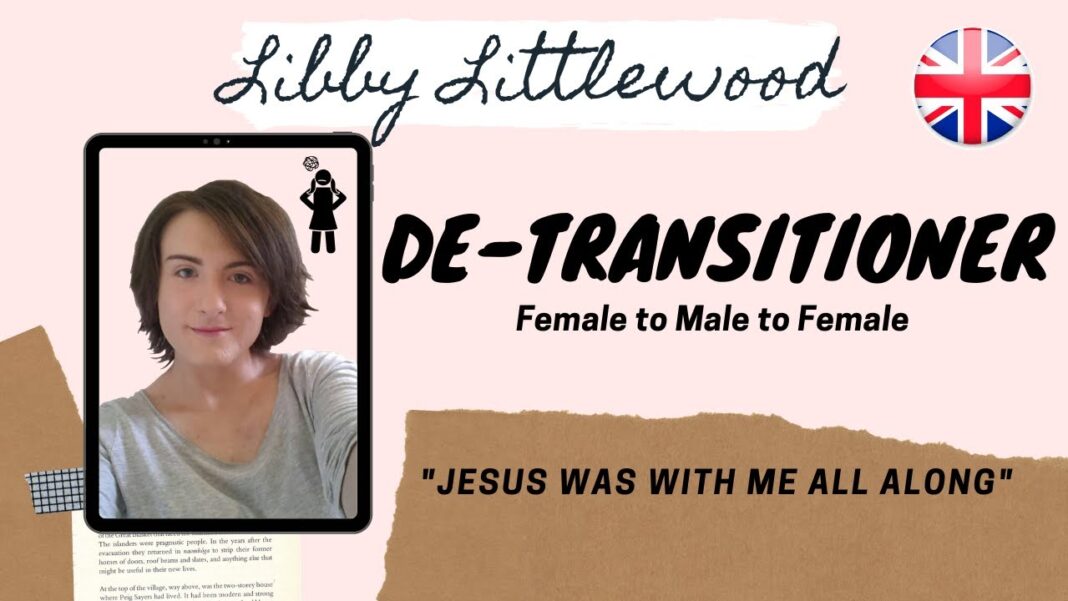 Topic: ‘My church didn’t know what to do with me’ – Libby’s BackToGod transgender story

During her teenage years Libby Littlewood pleaded with God to make her ‘feel like a girl’. With her prayers seemingly unanswered, she transitioned to live as a man aged 17, before being convicted by God to de-transition in her early twenties. Here’s her story in full

Having been brought up in a Christian family, the Lord was no stranger to me. When I was four, we moved to a small Baptist church. At six, I had my first tangible encounter with the Holy Spirit.

When I was 11, our church broke down. My brother became an atheist shortly after. That wasn’t an option for me: I couldn’t deny the existence of the God I knew, so instead I gave up on organised church, pursuing my relationship with God almost entirely through personal prayer.

From the youngest age, I assumed I would grow up to be a man. As I entered puberty, my struggles identifying with other girls became more distressing. After an evening of frantic googling, aged 12, I came across the word ‘transgender’. I readily adopted the philosophy that ‘female’ was, in fact,an internal feeling, a personality trait – something I didn’t have. I was affirmed in my belief that I wasn’t enough of a girl and resigned to the understanding that I would never be fulfilled without transitioning to live as a transman and injecting synthetic hormones for the foreseeable future.

I would pray for God to either make me ‘feel like a girl’, or transform me physically into a boy. He would respond, “Know that the LORD is God. It is He who made us and not ourselves” (Psalm 100:3). I spent the following five years trying to find a solution to my problems that didn’t involve transition, hormones and surgeries.

At 17, I relented and started living as a man. I started taking testosterone at 18, received a diagnosis for gender dysphoria and agreed to a ‘treatment plan’ full of surgeries.

Throughout this time, I never lost my faith in God. I would still hear his voice and pray to him. Whenever I was suicidal, he would whisper in my ear, “Have hope – I have a plan for you yet.”

Having never heard that LGBT lifestyles were sinful, I never thought to ask God what he thought of my transition. It wasn’t until I was 21, and in my first year of university, that God started to make drastic changes in my life. My testosterone stopped working and I was thrown into emotional turmoil. It took months for the doctors to solve the issue, during which time I called out to God, saying, “If you have some plan for me, it best be better than anything I could imagine!” His gentle response came, “Go find a church.”

Within a few months, I found myself at a large, Pentecostal church, attending two services a day and even playing in the worship band. At the time, I didn’t think anybody there knew I was transgender and that was ideal for me. I just wanted to live as a normal man and wasn’t interested in the LGBT community or activism. Unbeknown to me though, gossip spread throughout the church and people started to discover I was born female.

In September 2019, when I confided in a friend that I felt God was calling me to ministry, he responded, “I’d love to see you behind a pulpit one day, but we need to sort out this transgender thing first.”

To my surprise, he encouraged me to ask God what he thought of my transition. This prompted months of intense Bible study. I asked God, “Why am I transgender?” In response, I had two visions, one of which showed a demonic attack on my life. I didn’t understand, so I asked for a scripture to help. I opened my Bible and landed instantly on Matthew 13:24-30, the parable of the weeds. It was a month before I understood what it all meant.

In November 2019, I was watching a documentary on YouTube, called Tranzformed. After hearing testimonies from ex-transgender Christians, I realised that I could make the decision to leave transgenderism for Christ, regardless of the gender dysphoria I felt. I asked God what this meant for me and he referred me again to Matthew 13. The visions suddenly made sense: I was transgender due to evil deception and I needed to trust God’s blueprint for my life and surrender my body to him. That’s why Psalm 100:3 says, “It is He who made us and not ourselves”!

ALSO READ  The Return - A cry and call for Americas Repentance, Revival and Salvation
ALSO READ  Testimony- How prayer saved me from failure and a possible carry-over back in school

Wanting further assurance, I asked God for three proofs that it was actually him I was speaking to, like Gideon did in Judges 6.

First, I asked that I would have a bad dream from God if I was meant to live as a girl. At 10am I was due to visit a church to hear from a foreign guest preacher whom I’d never met, so I asked, at 1am, “Lord, please change his sermon this moment, to something that speaks directly into this.” Finally, I asked that God would have the guest preacher do an alter call and speak into one of the visions I’d had.

Each proof came true in turn. When I sat down in church, the preacher approached the pulpit and said, “I had a sermon prepared but the Holy Spirit came to me at 1am and said, ‘you’re not doing that anymore; you’re doing this instead.’” He proceeded to preach on Isaiah 45:1-3 about, “a season of double-doors, where you can fit everything through”. This spoke into my gender issues: I could be a woman and still be myself, rather than just one or the other. Afterwards, he did an alter call and when he came to me, he raised my arms above my head and said, “This means submission. You need to submit yourself to God’s will.” Convicted, I made a vow to God that night to submit my body to his will. I would no longer take testosterone or pursue any surgeries.

LIVING AS A WOMAN AGAIN

It wasn’t until a week later, on the 1st of December 2019, that God asked me to start living as a woman again. The eldership in my church were not enthusiastic about this, discouraging me from turning up at church dressed as a woman, in case people thought I was a man transitioning to become a woman! But God was convicting me not to bring deceit into his house, so I ended up without a church for the entirety of December.

In this time, I started living as a woman again. Although I was never really involved in the LGBT community, I lost lots of friends for taking a more conservative stance on sexual issues. I returned to church, briefly, in January to give my testimony. My church had no clue what to do and seemed afraid that my testimony was too controversial.

I wasn’t getting any support, so I sought help from the Changed movement, through which I joined X-Out-Loud Europe. I was given an opportunity to share my testimony online and attend a support group with other ex-LGBT Christians.

I’ve been living as a woman again for a year and 8 months and God has miraculously restored my mind and body. I’m blessed to no longer suffer from the effects of the testosterone I took for almost five years in total. It’s been an uphill journey of unlearning what the world teaches in favour of how God defines me, but regardless of how I feel, I know he’s always here for me.

They call it the gospel of love, I call it gospel of hate. They say it is from God, I say...
Read more
Catholicism

Idolatry in the Roman Catholic Church, and in some other Churches

Disclaimer: I don't write out of spite for any Church. For God knows that the Spirit He put in me wish...
Read more
BackToGod

Christian, who are you in the secret and who are you in the open? In your work place, at home, in your school environment, before your friends, away from possible reprimand, do you represent Christ or are you just like those who don’t know God? This question will help you judge yourself on this matter. For God cannot be mocked.
Read more