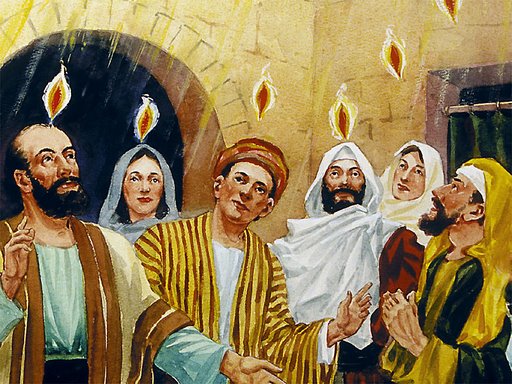 Topic: Pentecostal Christianity: the absolute will of God for all Christians

I Ogba Victor: a bond servant of Jesus Christ in the ministry of the Holy Spirit unto the Churches.

Pentecostal Christianity in experience, is the absolute will of God for all Christian churches.

A Facebook friend posted and criticized the Pentecostals because his neighbor had refused to celebrate Christmas. He wrote in disgust and spoke against the entire Pentecostal movement for not remaining with the original Church(Catholic).

When I saw the level of ignorance in his post, I argued that there was no Catholic Church or Orthodox worship in the bible. I pointed out that the first Christian Church was born at the Upper room and it was a Pentecostal Church, not in denomination, but in experience.

I also argued that the New Testament Churches where Pentecostal Churches having been founded by Men on fire. Later, the discussion was joined by other Catholics but none of them could contain the argument nor could they give proof of any Catholicism in the bible.

Apostle Peter whom they claim to be the first Pope was also, a Man on fire and how could they refuse the baptism of fire? I asked.

Pentecostalism in experience, is the move of the God. It is the plan of God for all believers in Christ and it will be the final state of the Jews at the last days when they look up to Christ for their eternal salvation.

BUT YE SHALL RECEIVE POWER, AFTER THAT THE HOLY GHOST IS COME UPON YOU: AND YE SHALL BE WITNESSES UNTO ME BOTH IN JERUSALEM, AND IN ALL JUDAEA, AND IN SAMARIA, AND UNTO THE UTTERMOST PART OF THE EARTH.

By implication of the statement, this power was to come and is not yet available.

This power was not given on the cross nor was it given after resurrection because Jesus had already died and resurrected before this statement.

It was not given on repentance and acceptance of Jesus because the disciples were all repented and loved Jesus.

Someone argued with me on Facebook that being born-again was enough. Another Roman Catholic worshiper said “the baptism of the Holy Spirit comes together with baptism of water”.

I’d bet he was taught that lie after asking questions from men who did not know or live in the truth. Probably by men put on white robes and people think that they have found God. Men who learn theology but have no knowledge of God or His Son. Or maybe he taught himself that lie having not being able to produce the gifts of the Spirit.

In the past and dark years of Christianity; Christians believed that the baptism of the Holy Ghost was over. The preachers preached that it was just for 3 generations from the disciples. These were nothing but self-taught lies that had no scriptural proof, taught by men whose life was ugly and unholy.

In those days, they killed and martyred men who asked questions like William Tydale who was killed by the Pope and the then Papacy for translating and distributing the Bible. How could they have received the baptism of the Holy Spirit in that state of heart and lifestyle?

I thank God that this falsehood was finally laid to rest after the Holiness movement was born. The Baptism returned and men could experience the power of the Holy Ghost. A reality which implied that God was searching for holy and born-again men to fill.

Therefore, to that man who said being born-again is enough, the truth they don’t tell you is that any true and faithful born-again Christian is a natural candidate for this Power as long as he is living a prayerful and Spirit led life. The power can come anytime the spirit of man is in position to receive it.

I repeat: Any born-again Christian living a prayerful and holy life is a natural candidate for this Power. Don’t tell me you don’t need it’ God says you need it.

‘And you shall receive power after…’ implies that they were at that stage powerless.

The disciples saw Jesus; they were there at the transfiguration mount; they saw His glory, they heard the voice “this is my beloved Son, hear Him”. They heard His raw messages as it was giving from the Father; they believed in Him; they witnessed His miracles and even was able to use the name of Jesus to work their own miracles in casting out unclean spirits, and they also witnessed his resurrection plus ascension.

What else was left? Why did they still need the outpouring?

Most Christians, millions of us rather, have not witnessed Jesus like the disciples did and still needed to be filled with Power from on high. We have not heard what they heard and they still needed to wait in Jerusalem for that Pentecostal experience.

ALSO READ  Who is the Holy Spirit?

Why do some Christian Churches think we can do without this power? Why do majority of us get satisfied with only going to Church? Who gave birth to the modern Christians who lack power and revival of fire and are satisfied? Why are we not praying and waiting until we get our own revival that comes with Pentecostal experience?

The works of the Holy Spirit is explained in the book of John and written all over the Holy Bible. This work includes, giving Christians a true experience of God. For the Son came to unveil the Father, and the Holy Spirit to reveal the wholeness of the Son.

It is great knowledge to know that Jesus Christ who founded Christianity had this Pentecostal experience in Jordan.

In Luke 3:22 it is written: “And the Holy Ghost descended in a bodily shape like a dove upon him…”. This mean that the Lord was a Man on fire.

It is also written in Isaiah 42:1: “Behold My Servant, whom I uphold, Mine Elect, in whom My soul delighteth: I have put My Spirit upon Him; He shall bring forth judgment to the Gentiles.”

Who then deceives you oh Churches that you can do without the Holy Ghost and His baptism? Roman Catholic brethren, who has lied to you that Pentecostalism is not where you ought to be and that Catholicism is the original? Orthodox Christians, who has told you that you are complete without Power from on high?

There is dire need for all Children of God to become Pentecostals in experience, there is great necessity for all Churches of God to embrace the baptism of the Holy Ghost. We are simply ineffective without His Power. For in the Spirit of Pentecost we can get the power we need to shake the world one last time for Jesus Christ.

Whether it be power evangelism, power for signs and wonders, power to manifest gifts of the Spirit, power for prayer, power for spiritual battles, or whatever power the Lord wants us to have, the baptism of fire and power is the source and Pentecostal Christianity in the move wherein this power lies. Amen!

Christian, who are you in the secret and who are you in the open? In your work place, at home, in your school environment, before your friends, away from possible reprimand, do you represent Christ or are you just like those who don’t know God? This question will help you judge yourself on this matter. For God cannot be mocked.
Read more
America

They call it the gospel of love, I call it gospel of hate. They say it is from God, I say...
Read more
Prayer

Christian Men and Women were saved to pray; it is our divine apportionment

And he spake a parable unto them to this end, that men ought always to pray, and not to faint; Luke 18:1
Read more