What is depression? How a Christian can live above it!

“Come to me, all you that are weary and are carrying heavy burdens, and I will give you rest. Take my yoke upon you, and...
Read more

Who is the Holy Spirit?

But ye shall receive power, after that the Holy Ghost is come upon you: and ye shall be witnesses unto me both...
Read more

There is a way that seems right to a man, but the end thereof is destruction. Proverbs 14:12 The question is,...
Read more

For, behold, the darkness shall cover the earth, and gross darkness the people: but the Lord shall arise upon thee, and his glory...
Read more

Baptism of the Holy Ghost is an experience a Christian man and the Christian church cannot do without.
Read more

The abuse of grace; where we have failed God

“Who are you, O great mountain? Before Zerubbabel you shall become a plain! And he shall bring forth the capstone With shouts of “Grace, grace to...
Read more 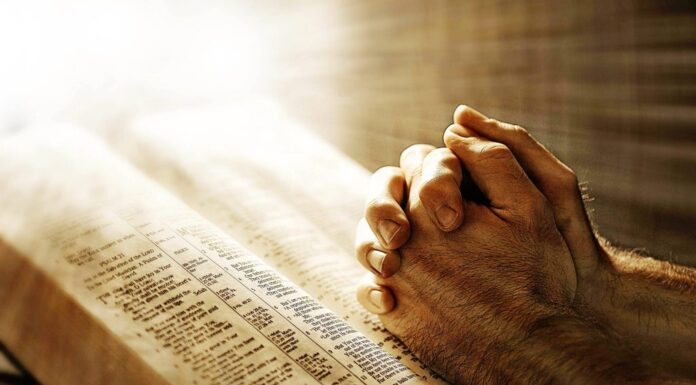 And he spake a parable unto them to this end, that men ought always to pray, and not to faint;

Prayer is as vast as God. Prayer is as powerful as nuclear weapon. Prayer is the number one weapon of a believer. A praying Christian stops sinning and a sinning Christian stops praying. The church started to decay and became weak when we stopped praying. When sin and darkness came upon us, prayer left us. When prayer left us, sin and darkness came on us. For us to be saved we pray; for us to remain saved we pray. No man is greater than his prayer life; no church is greater than her prayer life.

Growing up, there were songs we always did sing. I still remember two songs we sang with playfulness, which now makes so much sense to me. One of them is:

And the second one is:

These were songs the old generations of God taught us. When they sang it to us as kids, we chanted back in joy and playfulness. Never did I imagine that we were being playfully given the secrete to why the church was on fire for God. True! Prayer was the secrete for which they were alight for God. Prayer was the back bone for the old time Holy Pentecostal churches that was frequently torn apart in gatherings by the Holy Ghost. My dad and mom always talk about the many tears in the church they were converted to. They talk of the power they met when they became Christians. My mom still talks about the revival that came upon the church when she was still a teenager. During those years as a growing child, I never knew that prayer was the not just the key to those great encounters of power and God, but also the Master key that sustained the church in power, holiness and grace.

Brethren, before we obtained salvation we prayed. Now, after salvation what next? The answer is blank for many Christians of our time. It is blank for many churches and ministers of our time. That is why many has stayed as Church goers for years without ever growing to full knowledge of God and experiencing what sanctification and Holy Ghost baptism is. I could still remember struggling with a particular sin that led me into praying fasting for over 30 days. How I gained power over it, I still cannot tell. But this I know: I received help through prayer. For a man who prays gains power to overcome sin.

In Luke 18:1, Jesus told the disciples a parable to show them that men always ought to pray. Jesus himself lived a life of fire through prayers. Often, the God in man form retreated to pray. He spent many nights on the mountain making prayers. Even on the eve of His crucifixion, our lord was praying until he was arrested. It was also recorded that he spent 40 days and 40 nights in prayer in fasting. And I would always ask- “what was the Lord praying for that would take him 40 days?” If there was ever a man holy enough, righteous enough, worthy enough, and with enough faith to pray and it will be answered, it was the Lord. In just 5 minutes, He could have prayed through humanity. However this prayer warrior understood that prayer was the master key. But what is the master key of His church today? Songs and zero Prayer. Songs are great, but it is not the master key!

Read: Shall we pray or shall we sing songs?

What about the disciples? After Jesus went back to His father, the church engaged in many praying and fasting. It was in one of those prayers that they were baptized by the Holy Spirit. Brethren do you not know that the Holy Spirit my Master is the God of prayer? Very many times we do not know what to pray. But if a man has the spirit of God living in him, that man will always find what to pray. One day the Holy Spirit woke me up to pray. I was blank because I had been in prayers. I asked Him what He would like me to pray for, and my God replied- “Pray for the church”.

Do we now see why men cannot pray? Because we have lost the presence of the Spirit of God who is supposed to help us and teach us how to pray. Because we became sinners saved in sin and no more holy people saved from sin. If the Holy Ghost births holy prayer people, then sin births sinful and prayer-less men.

Apostle James was captured by Herod and the church was silent and prayer-less. James was later killed and they grieved and buried their brother. I do believe they would have sung hymns and blessed God for considering a brother to suffer and die for Christ. It was not long Peter was also captured and then they woke up and thundered intercessions. Then the God of prayer sent help to Peter in prison. They would have continued to count losses if they had refused to pray. God purposefully thought them a big lesson.

Many Christians would like to be like Apostle Paul. But becoming like Apostle Paul is a sacrifice many of us will not want to make. For Paul was a warrior of faith and prayer. He prayed until the demons knew his name. For the demons spoke to the sons of Sceva and said, “Jesus I know, Paul I know, who are you”?

I have known a little about the prophets in the bible and I can tell you that no one comes close to Daniel in prayers. Let it be of no surprise when you read in the book of Daniel 10:11 “…O Daniel, man greatly loved…“. Daniel never stopped pouring out prayers to God for his people. When he was envied for the grace of God upon him, his adversaries plotted to bring him down but could not find a way to bring him down. Then they decided to set him up with prayer because they knew he was a man of prayer. And guess what? He fell for it. For to him prayer was larger than life, and he would rather die praying than live without prayer.

Previous articlePentecostal Christianity: the absolute will of God for all Christians
Next articleThe need for Holy Ghost revival (Part one)

Pastor Ogbahttps://ogbavictor.com
Pastor Ogba Victor is a Levite and Pastor with the Assemblies of God movement in Nigeria. A friend of God and A servant to the Churches.

My gospel is not my own....
Read more

I, Ogba Victor a servant of Jesus...
Read more

Managing the household of God as...
Read more

For, behold, the darkness shall cover...
Read more

God is going to do great things in our time just like He promised. RevivalFire is a Pentecostal revival aimed blog to help Christians know and understand truths that gave birth to the Church. On this blog you will find truths you may never find in the modern day Church that lacks the power of God, but these are truths that birth Holy Ghost revival.